Jeep began as Willy’s MB and have been in production since 1941, making it the oldest off road vehicle made. The civilian models were released in 1945. Joe Frazer, president of Willy’s-Overland claims to have coined the name “Jeep” by slurring the letters “G.P.” These letters were from a term used in the military to mean a general purpose vehicle. However, the term “jeep” has been used since the early 1900’s for vehicles that are undergoing military testing.

Regardless of where the name began, Jeep is now a proud part of the Chrysler Group. While Jeep has made a few pickup trucks in the past, since the 1980’s the product line has been solely SUV’s. While the automobiles have been updated and redesigned many times through the years, the general body shape and style has been kept in use, making it recognizable to even those who are not car enthusiasts. Actually, it is the most recognized brand in the world. 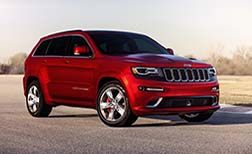 The Jeep Grand Cherokee is an upscale, mid-sized SUV that has been produced on a unibody frame since the first day of production. Thought the design and ideas began in the early 1980's, due to some corporate politics the release of the Grand Cherokee was delayed until 1992 when the 1993 model was released.

Due to limited choices and the price tag, the early Jeep Grand Cherokees were low in demand. However, as you know, they have grown to represent the top of the line in mid-sized SUV luxury. 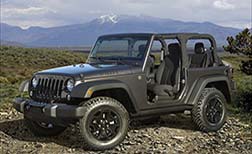 The Jeep Wrangler is a descendant of the WWII military Jeeps and was brought to every day drivers by Willy's Civilian Jeeps in the late 1940's. Since then the Wrangler has become the most recognized SUV to bear the Jeep namesake and an icon of off road driving.

Over the last 8 decades, the Wrangler has gotten a lot of updates and improvements. Yet Jeep has chosen to keep the iconic wrangler appearance even on the current models. This is a strategy that seems to be paying off with continued sales spanning two centuries.